Seismic tomography shows that slabs of oceanic lithosphere that subduct to great depths in the Earths mantle frequently flatten out and stagnate in the transition zone before eventually sinking through the 660 km discontinuity into the lower mantle (see figure). The cause of this behavior is evidently caused by density changes in the slab but has not been fully understood. One of the most important mineral reactions that causes an increase of slab density is the transformation of pyroxene to majoritic garnet. Kinetic experiments performed at the Bayerisches Geoinstitut now show that the kinetics of this diffusion-controlled reaction are extremely sluggish at pressure-temperature conditions within a subducting slab in the transition zone. This results in pyroxene persisting as a metastable phase which keeps the density of the slab low, thus resulting in stagnation of the slab. As pressure and temperature increase, it is then expected that the metastable pyroxene will undergo a polymorphic phase transformation to akimotoite (which is also a metastable phase under subduction zone conditions). Akimotoite has a very high density which therefore explains the eventual descent of slabs into the lower mantle. This explanation is supported by a recent seismological study that has identified the possible presence of akimotoite in the Tonga slab. 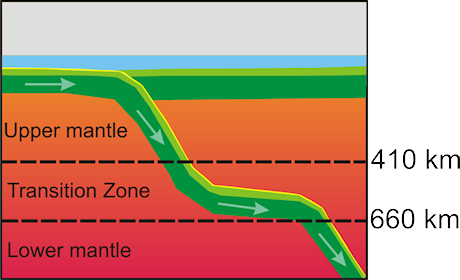 Schematic illustration of a subducting slab that temporarily stagnates in the mantle transition zone before eventually descending through the 660 km discontinuity into the lower mantle. This behavior is shown by van Mierlo et al. to be caused by metastability of pyroxene and its eventual transformation to akimotoite.