Water has been considered to significantly affect the mantle dynamics. Experimental deformation studies suggested that even several wt. ppm of water in olivine could enhance the creep by orders of magnitude. However, the previous deformation studies have some limitations, e.g., considering only a limited range of water concentrations and using polycrystalline samples with oversaturated water, which might affect the results. Rock deformation can also be understood by silicon diffusion coefficients, because the high-temperature creep of minerals is limited by self-diffusion of the slowest species which is silicon in the case of olivine. In this study, we measured the silicon self-diffusion coefficient, DSi in forsterite at 8 GPa, 1600 - 1800 K, as a function of water content CH2O, showing that DSi is proportional to (CH2O)1/3. This water exponent is strikingly lower than that obtained by deformation experiments (Fig. 1). If the water content increases from 1 to 1000 wt. ppm, the creep rate would increase by a factor of 4000 based on previous deformation results, but in reality it is only by a factor of 10. Thus, the effect of water on the upper mantle rheology is much smaller than previously considered and therefore many issues in geodynamics must be reconsidered. The smooth motion of the Earth's tectonic plates cannot be caused by mineral hydration in the asthenosphere. And, water cannot cause the viscosity minimum zone in the upper mantle. Also, the dominant mechanism responsible for hotspot immobility cannot be water content differences between their source and surrounding regions. 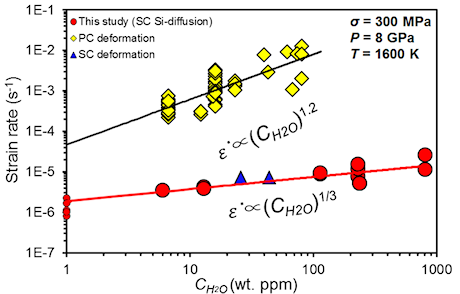