Synthesis of a superconductor based just on theoretical forecast has so far remained elusive. There have been strikingly few cases, limited by thoroughly studied elemental materials, when theory successfully guided the experiment to a discovery. Based on prediction from the first principles, we synthesized and investigated a new superconducting material, iron tetraboride FeB4. Additionally to the predicted properties, it was found that FeB4 is highly incompressible and superhard with the nanoindentation hardness of 65 GPa. It opens a new class of highly desirable materials combining advanced mechanical properties and superconductivity. Development of superhard superconductors may lead, for example, to a possibility for designing new superconducting nano- and micro-electromechanical systems requiring high-strength superconducting elements.

The synthesis was realised at pressures above 8 GPa and high temperatures (1500 °C) using multi-anvil apparatus at Bayerisches Geoinstitut. Single crystal X-ray diffraction confirmed the predicted structure (Figure 1). Compressibility measurements in diamond anvil cells conducted at ESRF (Grenoble) using single crystals of FeB4 revealed that the iron tetraboride is stable under pressure to almost 40 GPa and has a substantially high bulk modulus, 252(5) GPa, that is characteristic for hard materials. The FeB4 exhibits significant anisotropy of the elastic behaviour. It was experimentally established that along one crystallographic direction (the b-axis) the structure of FeB4 is as stiff as that of diamond. Physical properties measurements revealed the predicted bulk superconductivity, which is likely phonon-mediated that is rare for Fe-based superconductors.

Superconductors remain one of the most challenging classes of materials to develop. The present study demonstrates a possibility of designing superconducting compounds ‘from scratch’. 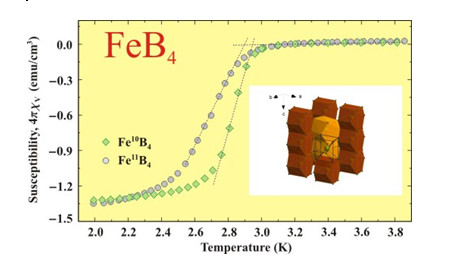 Figure 1. Magnetic susceptibility of FeB4 measured in an applied field of 1 mT after zero-field cooling. Two sets of data were collected on the samples enriched with 10B and 11B isotopes demonstrating isotope shift the isotope shift in Tc. Inset shows the crystal structure of FeB4 presented as a packing of columns of FeB12 polyhedra along the c-direction; the columns are connected by common edges of the adjacent polyhedra.