Evidence from many sources indicates that the Earth’s core is made up predominantly of iron (or iron-nickel alloy), but mixed with one or more light elements to match the core’s lower density. Many candidates have been proposed, but none so far have managed to explain the unusual elastic properties (more specifically, the Poisson’s ratio) of the inner core. Despite the enormous pressure at the centre of the Earth, the material of the inner core behaves like tire rubber, meaning that it expands considerably when compressed in the opposite direction. In a new study that formed part of the doctoral thesis of Clemens Prescher (BGI), high pressure and high temperature measurements in a laser-heated diamond anvil cell combined with synchrotron radiation from both the European Synchrotron Radiation Facility (Grenoble, France) and the Advanced Photon Source (Argonne, USA) showed that carbon dissolves into iron at these conditions to form a stable phase (Fe7C3) that modifies the elastic properties of pure iron to the extent of matching the elastic, almost rubbery, properties of the inner core (see figure). Thus a large portion of Earth’s carbon may be hidden in the core, making it the planet’s largest carbon reservoir. 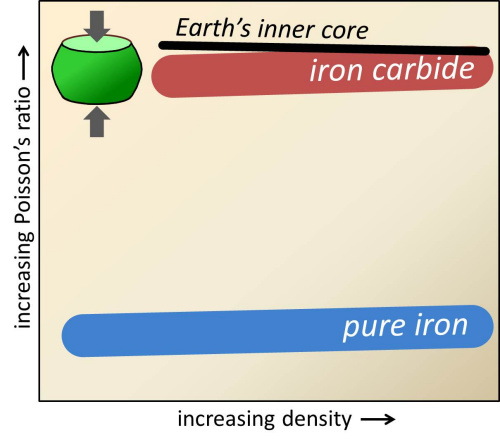