The nearest International Airport to Bayreuth is Nürnberg (Nuremberg in English). Connecting flights to Nürnberg are available from Amsterdam Schipol Airport, London Heathrow, and Frankfurt.

If you arrive in Nuremberg, you first have to go from the airport to the main train station ("Hauptbahnhof" in German). You can do this by taxi, but it is faster and cheaper if you take the subway ("U-Bahn"). The subway station (follow the sign "U-Bahn") is just outside the airport building. You first step outside and then you have to go downstairs to the platform. Before you go downstairs, you need to buy a ticket at the vending machine, which is situated just at the upper end of the stairs. For a ticket to the main train station, if I remember correctly (I am not entirely sure) you have to push the second button from top. You need a few coins to pay, about 2 Euro. You should be aware that there are no currency changing facilities at Nuremberg airport, so you must arrive with small change. You will also need € 16.10 for the single train fare from Nuremberg to Bayreuth. (April 2008) Tickets can be purchased from the ticket office ("Reisezentrum") in the main hall of the railway station or at a vending machine. Tickets cannot be bought in the train anymore. You must have a valid ticket before getting onto the train. From Nuremberg trains leave from 05:48 to 00:12 every day of the week. But be careful: Sometimes, there are two or three trains coupled together which will later be split and only one of them will go to Bayreuth. Usually, it is marked on the platform and it should also be displayed electronically inside the train. If in doubt, ask the conductor (most people in Germany understand some English).

If you fly to Frankfurt, it is best to travel to Bayreuth by train which you may catch direct from the airport. Through tickets to Bayreuth cost about € 60.- one-way. It is often cheaper to buy a travel pass from your travel agent outside of Germany. There is a train every hour direct from the railway station at the airport to Nuremberg, where you have to change trains (see "by train" below). Total journey time from Frankfurt to Bayreuth by train is about 4 hours. Last connection to Bayreuth leavs Frankfurt (M) Airport "Fernbahnhof" at 20:37 arriving at Bayreuth 01:13.

International flights also come to München (Munich) Airport. From the airport take the S-Bahn to Munich 'Hauptbahnhof', a ride of about 50 minutes. 'S-Bahn' tickets are purchased from vending machines at the station. From Munich 'Hauptbahnhof' there is an hourly train service to Nuremberg, where you have to change trains. There is a new high-speed train connection from Munich to Nürnberg. Total travel time from Munich train station to Bayreuth train station is only two hours. 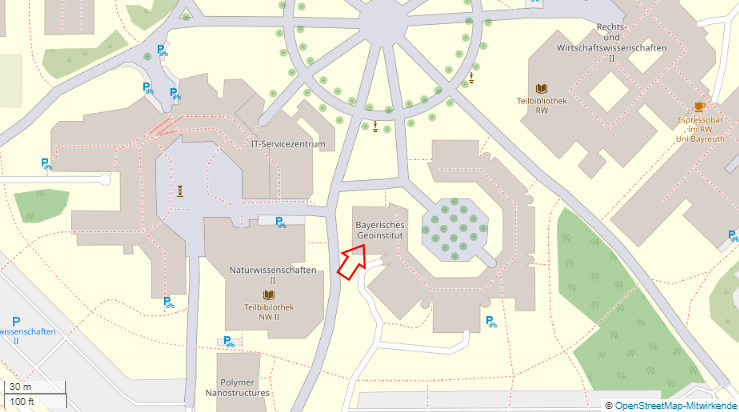